A Dentist’s Mission to Deliver Dental Care in Africa 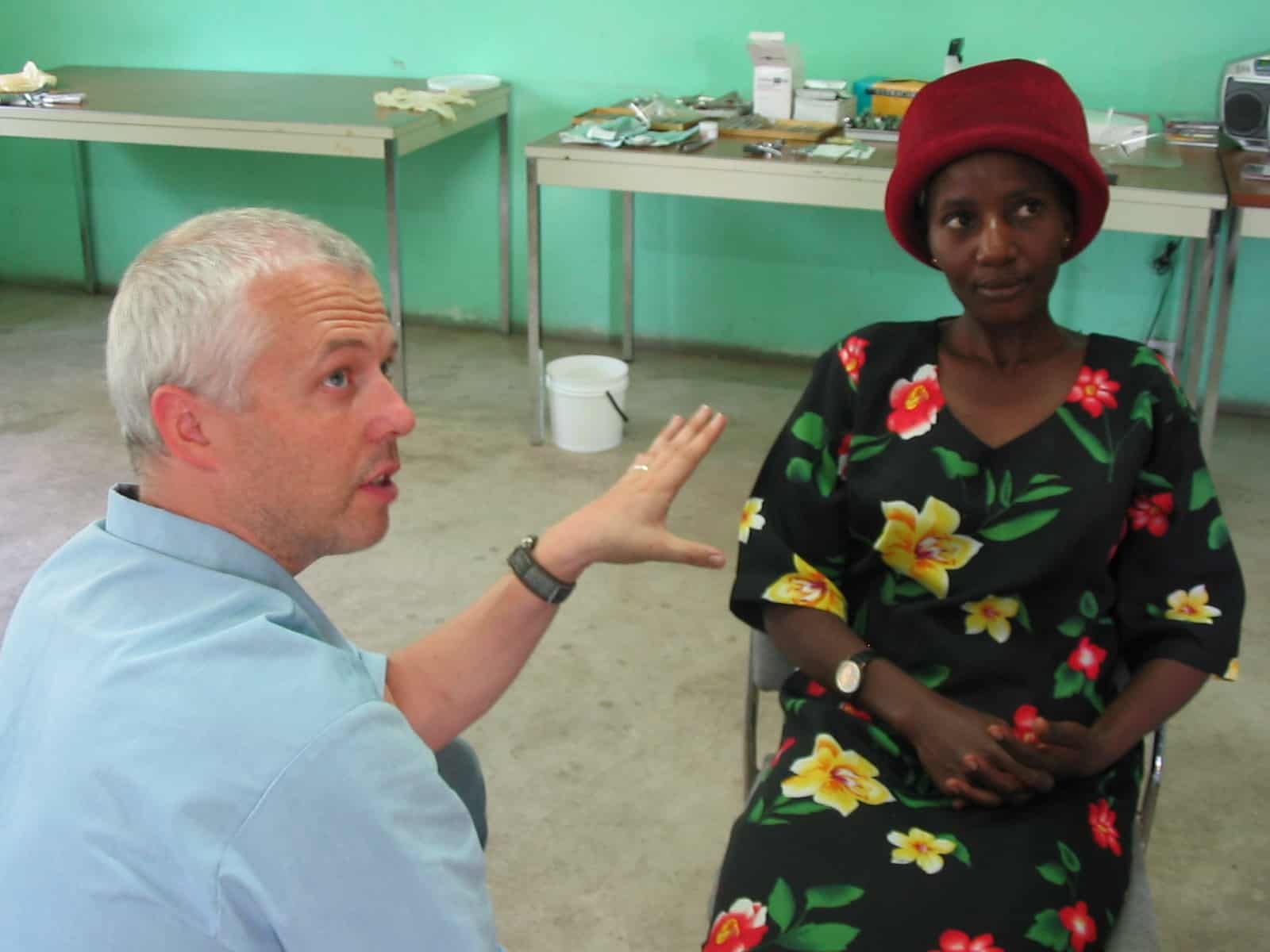 Dental treatment outside the UK can sometimes leave much to be desired, and few people know this better than Sunderland-based dentist Ian Wilson.

Unlike most British dentists, Ian Wilson has been given frequent reminders of the lack of provision in dental care seen abroad through his role as founder and past clinical director of dental charity Bridge2Aid (B2A). Ian’s journey into serving some of the poorest communities began in 1990 after a visit to Togo with Mercy Ships www.mercyships.org.uk. 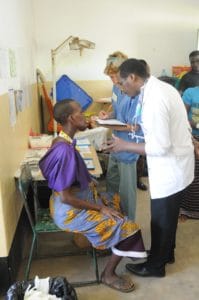 From that point, he knew that his profession as a Dentist would allow him to bring hope & freedom from pain to many in a significant way.

During his time working as part of the charity, which specialises in providing effective emergency dental care in developing countries, Ian has seen a number of extraordinary cases that prompted the launch of the charity.

However, perhaps none were more shocking than that of a patient in the Tanzanian city of Mwanza, who arrived with his jaw broken in two places following a trip to a local healer in 2004.

Since that time the Bridge2aid ‘family’ of a passionate team & volunteers have taken responsibility for providing a huge amount of dental care in not only Mwanza but through our rural of Tanzania. However, the focus over the past decade has been to train rural health workers in emergency dental skills to prevent such agonising experiences from taking place in the future. ‘’Poverty is not a lack of money but an absence of options; where hope and dignity for rural communities are eroded.

Sad to say that communities with oral pain are more likely to self-medicate, perform DIY extractions or visit a local healer rather than travel into the centre of the city for proper treatment.’’

“In the UK, there is one dentist for every 2,500 people. In Tanzania, which is one of the world’s poorest countries, that ratio is one dentist per 400,000,” he said. “Even if they can find a dentist, most people can’t afford one. Rural Tanzanians suffer, on average, for two years with often severe dental pain before they see someone.”

In some parts of the world, it’s still possible to die of a toothache 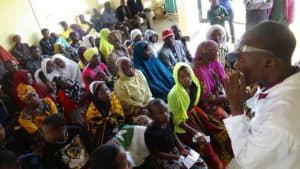 All too familiar with the problems caused by lower-priced healers or untrained health workers, Ian has told of cases where the use of improper equipment and incorrect techniques can lead to a range of life-threatening issues. These have included malnourishment, dehydration, breathing difficulties, infections, septicaemia, and even death. “It is no joke,” says Ian. “In some parts of the world, it’s still possible to die of a toothache.”

That very first journey in 1990 with Mercy Ships a Christian-based programme offering health care in Africa would then lead to Ian spending the next 10 years of his life volunteering for dentistry projects all across East & West Africa. However, fears that he was having little sustainable impact on the local oral health strategy motivated him to consider a different approach. In 2002, after meeting and marrying his wife Andie, they moved out to Mwanza to live and the journey that is Bridge2Aid began.

In 2004 Bridge2Aid opened the Hope Dental Centre in Mwanza, which was built around a “Robin Hood approach”. “Those that could afford treatment allowed us to subsidise those who could not! Equally, it provided a model of ‘not for profit ‘ working and transparency of funding streams, meaning that all further donations went straight to the charitable objectives”.

Dealing with HIV, delivering babies and now taking out teeth! 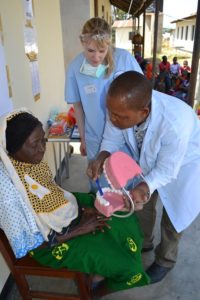 After setting up B2A, Andie & Ian together with Mark & Jo Topley and a small team of volunteers began training rural health workers across the region to help promote oral care and prevent the use of unsafe remedies in treating major dental problems.

“These guys are based out in the community and they do everything from dealing with HIV, delivering babies and now taking out teeth,” Ian has explained. “All most rural Tanzanians need is someone who is trained to take their tooth out and get them out of pain.”

Many of these health workers are also able to travel with their skills; helping to provide much needed dental care training to the outer regions of Tanzania’s towns and cities. Equipped with a basic dental toolkit & steriliser, these officers are making measurable differences in a country where grassroots healthcare is not always easy to find.

Ian & Andie with their family have since moved back to the UK, but their vision has continued through the growing team at Bridge2Aid and passionate volunteers. Through the continued efforts of the Bridge2Aid ‘family’ opportunities are opening up that will allow training to happen across other regions in Tanzania.

“We’ve seen all that we hoped and dreamed for become a reality. However when over 70% of the world’s population do not have access to that simple pain relieving tooth extraction; then there is still much to do. Everywhere the team go to train we still encounter horrific DIY dentistry, where people self-medicate, use herbs or any old antibiotic they can get hold of,” he said.

Having returned to the UK, Ian is currently working within NHS dentistry as a practitioner and within Dental Foundation training. 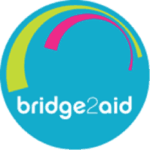 Join us at our 1st Annual Bridge2Aid conference on 24th June.  Click here for more info and tickets.

But Well Before I Was Helping Others Succeed, I Could Barely Help Myself…

Before starting my own Dental Marketing Agency, I worked in almost every role within the dental business, including as a Dental Nurse, Practice Manager, Treatment Coordinator, and Business Development Manager, managing various practices across the UK.

I made a ton of mistakes along the way and experienced first-hand what it’s like to be on the other side of the spectrum.

So many days I could hardly get out of the bed in the morning…it was the hardest thing in the world to accept that you might be the BEST at what you do, but without proper and strategic marketing, it all didn’t matter.

I did a lot of things to supercharge my knowledge about marketing and increasing awareness and when none of them worked out for me. I was ready to quit and convinced I would never be able to figure it out.

I was desperate, to say the least. I followed the “how-to” course after course and so-called “marketing experts”. And was endlessly bleeding money.

Of course, you know exactly what I’m talking about, right?

But… Just Before I Was Ready to Throw in the Shovel, A Stroke of Luck Changed Everything.

You can only run into so many walls before you get so frustrated that the only option left seems to be quitting.

I was just about at that point when I discovered how to effectively employ and use laser-targeted digital marketing to attract IDEAL clients and help entrepreneurial dental practice (clinic) owners to increase their revenue, grow their teams and finally gain financial freedom.

As soon as I discovered this, everything instantly got easier.

With this breakthrough and amount of success I was experiencing, I knew I couldn’t keep it on lockdown.

Since then, I’ve run into hundreds of dental practices who encountered the same, never-ending battle I went through. And it seemed pretty unfair to keep it to myself… especially since it’s what made all the difference in my success.

Today, my agency has been on the Dentistry.co.uk Influential List for 3 consecutive years with our combined clinical and marketing/sales knowledge which separates us from other sales and dental marketing agencies.

Now, obviously, I’m not here to throw my achievements in your face.

We want to help you take your dental practice to the next level with our years of combined experiences, innovative marketing tools, and hands-on training sessions.